So Apple has come out with a new tech called the HomePod at the recent WWDC 2017 keynote. What is the Apple HomePod? And how does it stack up to similar products such as the Amazon Echo and Google Home?

You can see a dedicated review of the Google Home here from BloomTimes.

What is the Apple HomePod?

The focus of Apple HomePod is Apple Music, so to that end it is largely for entertainment. However, it is not without competition, there is also Amazon Echo and Google Home which we have written about here.

How does it line up?

The Apple HomePod has seven tweeter speakers and one woofer placed inside a rather round and squarish casing. The size of the unit is 172 x 142 mm at a weight of 5.5 lbs.

Already in the weight department, the Apple HomePod is at a disadvantage when compared to the Amazon Echo and Google Home. 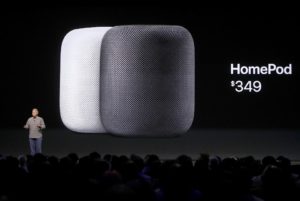 The Amazon Echo weighs 2.34 lbs. while the Google Home is at 1.05 lbs. Granted, the other two are much smaller in size than the HomePod and naturally would weigh less.

Perhaps one advantage of the Apple HomePod is the speakers themselves. With seven tweeters and one woofer it should offer much better sound quality than the Amazon Echo and Google Home.

However, the other two have smart home and third party support. Meanwhile, Apple’s HomePod only has HomeKit announced up to now.

Another disadvantage it has is that music support only comes from Apple Music. The other two have a much broader music support.

For the Amazon Echo there’s Amazon Music, Spotify Premium, Pandora and TuneIn, among others. Google Home has Pandora, YouTube Music, Google Play Music, Pandora and a few others.

Apple HomePod costs much more as well. It will retail at $349, which is twice the price of the other two with Amazon Echo coming in at $180 and Google Home at $129.

For connectivity, both Amazon and Google have their units connect through wi-fi and  BlueTooth while the Apple HomePod so far only connects by wi-fi only.

So is Apple HomePod a game changer?

What’s the verdict then? So far it is hard to tell. With its seven tweeters and one woofer, the Apple HomePod should theoretically sound better and so justify its price tag.

However, it still lacks some features that Amazon and Google’s products already have. The Apple HomePod won’t be commercially available until December, so there could be changes to it by then.

The downside however is Google and Amazon could also make much further advances in this time with products already on the market.  Could it be too little, too expensive, too late for Apple?