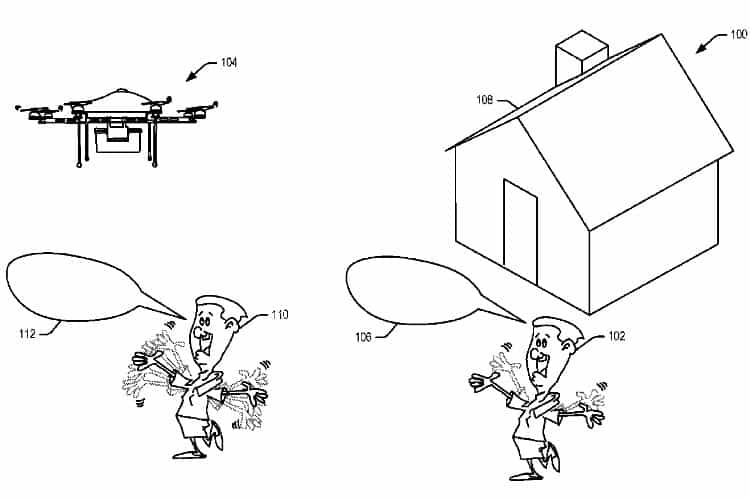 Sometimes you wonder if the developers of new technologies just have too much of a sense of humor or if there is actually something to the technology they patent.

Amazon was awarded a patent with the title: “Human interaction with unmanned aerial vehicles.” From the abstract of the patent:

The patent was actually filed in July 2016, but was awarded to Amazon this week.

The filing goes into deep detail about how a human could control the flying drone and you can read all about it here.

Certainly, the most humorous part of the filing is the drawing of the man trying to control the drone by gesturing and shouting at it. For the record, the person in the drawing has no resemblance to Jeff Bazos.

Amazon probably realizes that drone deliveries may require additional gesturing, but this also may indicate the company is not just looking at mobile devices or some other homing unit to land the drone.

This patent could be used for landing packages in fields and remote locations. In theory it seems, the drone would fly to a specific spot from which a human than can help the drone land the cargo safely.

Of course, drone deliveries are still in its infancy, so Amazon and others are going to patent any idea that might be useful down the road.

Do note, just because the patent was awarded doesn’t mean there is a test unit in existence or the company is actually thinking about building one.

But when these type of patents surface, they provide a bit of a view behind the curtain on what engineers are thinking about and how they may solve some problems.

Do you think we will ever see a drone that a person can actually control with their voice or by hand gestures? Head over to our Facebook Discussion Group or use the comments section below.