UPDATE 1 – MARCH 23: We have been made aware that eBay questions the circumstances around this report and considers it to be false. We confirmed from our logs that at one time it was posted on their community forums, but it is no longer accessible. We also know that it was posted on a Facebook forum before we published it. However, we have other information separate from the original FB post that suggest this is a valid story but have requested additional information from the reporting seller and will provide updates here.

UPDATE 2 – MARCH 24: eBay in Australia reached out to us asking us on Twitter to have the seller contact them. We did so. Nothing further was mentioned by eBay Australia to us about this report. In the meantime, we have become aware of a second claim by an Australian seller that the same happened to them. However, except for the actual claim, we have no other information on the second supposed incident. We did tweet back to eBay AU to clarify the report. We do find it strange that they didn’t come out and deny it in the first tweet. If they are not running such a program, then just say so and we will update this story. Especially since it appears eBay in the U.S. removed a link to our story on their community boards… So instead we are left wondering more about this situation.

UPDATE 3 – APRIL 2: There has been no response to our request for clarification from eBay Australia about this situation beyond the original contact they made asking us to tell the seller to notify them.

UPDATE 4 – April 4: By way of Twitter, eBay Australia confirmed they are experimenting with turning on Make Offer on select listings to “boost the marketability.” But they say there is no automatic acceptance of offers as was reported by the seller to us. We thank eBay for reaching out and providing information to the story so that we can update readers on this situation.

Hi. The new feature is designed to boost the marketability of the sellers’ items without automatically accepting the offers that the sellers may receive. We are looking into this report.

We have received a tip off this morning from one of our Australian readers and eCommerce seller who has spotted something very unusual with their eBay listings.

Requesting to remain anonymous they have reported that due to slow sales on one of their listings eBay had taken it upon themselves to activate best offer on the listing and also set the best offer rule to accept offers at around half the original listing price.

Have you noticed this too?

This is the first time we have seen reports of this nature and if you have seen anything similar then please let us know either in the Facebook group or in the comments below.

As stated above the person who reached out wanted to remain anonymous but has shared with us some screenshots explaining what they have seen and the effect it had on their listings. 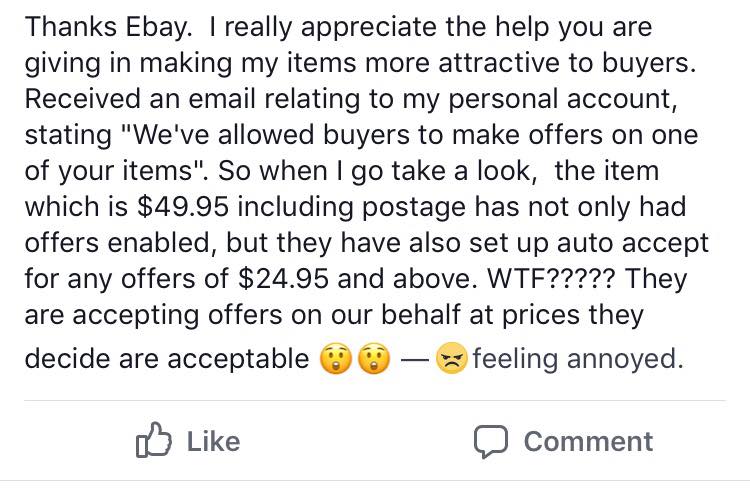 As you can see from the email above eBay have “allowed buyers to make offers” on their items and then you can see the changes marked in the sellers revision history.

What is not clear from the eBay screenshots is what price they set the best offer as, however as you can see on the first post from a Facebook group post is that apparently eBay had set the rules to auto accept offers at 50% of the original listing price.

This leads us to question what could be the reason for doing this?  In the example we have seen it was done on just one product which was apparently not getting the views eBay were expecting from similar listings.

As you know there could be a number of reasons for why a listing might not sell, and price is just one possibility.

Could eBay be trialling a price match feature, where they have spotted either a better price on eBay or perhaps an external site and are aiming to become more competitive.

Either way it seems to be a bold move by eBay to interfere with a sellers pricing without knowing the costs potentially involved with the product.

Let us know what you think or if you have any more insights on this.

Connect with us: Head over to our Facebook Group for Small Business Sellers and interact with other small business owners.